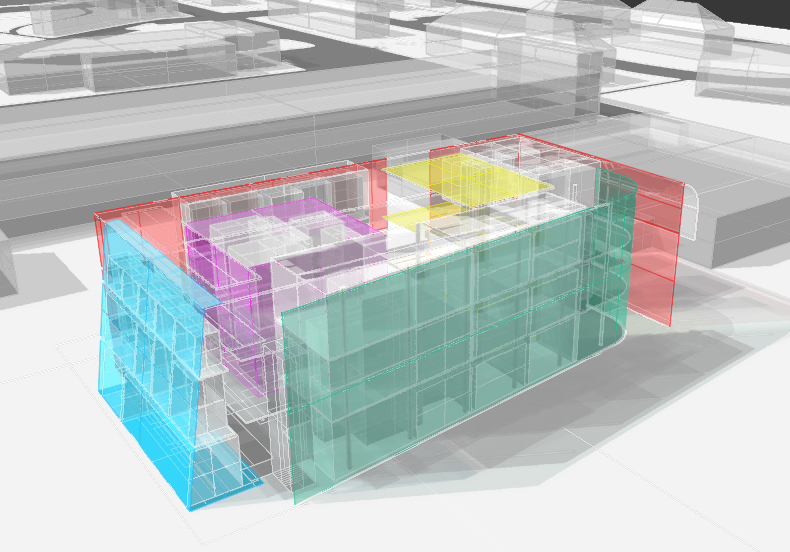 MDSA put together a set of schematic concept plans in response to Daemen college’s call for proposals. The selected location placed the new Library Information Center at the heart of the campus and calling for an exciting design. Examining the interrelationships of the program was a crucial first step towards understanding the underlying fundamental needs. Program complexities extended beyond simple functional dependencies and alluded to the making of a great “dramatic” space that controls, forms and organizes other aspects of the program. Such an environment, done imaginatively and thoughtfully, cannot help but be invigorate, challenge, and encourage innovation among its student and faculty users. Our initial investigation considered schemes that originate from a single notion – the old related to the new – about the program elements.  This notion consisted not only of the physical manner in which materials and documents are housed and accessed, but also the interaction of the user in utilizing these systems in their search through the available resources.  It must be considered that many resources will actually exist outside of the Center, but the Center itself should be a magnet to attract a researcher through its comprehensive programmatic and spatial environment. The proposed schemes were sketchy and diagrammatic, and the images complex, transparent and dense – meant to serve as much to generate further ideas as to analyze and examine current ones.

The overriding impression of the new building is that of a “jewel”, object-like but unmistakenly dominant on the site as both foreground and background.  The information commons and the collections area are spatially interwoven; outwardly expanding from center to perimeter to an envelope programmatically loaded with the advanced technology elements.  A high-tech “green” skin surrounds the dense “older” archives of the core, while the west wall becomes a “vertical” reading area containing individual and group study areas.  Natural light penetrates from the corners and is “filtered” through layers of program at the exterior walls.

The building center is occupied by a transparent “void” space (the information commons) flanked by a dense “solid” space (the collections area).  The great void space gets controlled diffuse natural light from above.  The dialogue between the two organizes all other elements surrounding them.   Each of the four sides is developed in a particular manner responding to their orientation.  Programmatic components are grouped and layered at the perimeter for example, those facing south forming part of a “green” glass curtain wall.

Tackling the major issue of wanting to hide the existing Duns Scotus Hall, the new building is linear and stretched across the available site.  The ends become articulated as solid object (collections) to the west and sky-lit atrium (commons) to the east.  The interior connection between the two, flanked by program elements forming the perimeter, and integrating seating and study areas along its length, becomes the great double/triple height space connecting one end of the building to the other.  The south façade presents a great opportunity to integrate with the tremendous lawn area used by students for outdoor activities.